Our journey to Zaire, Africa, now called the Democratic Republic of Congo, began in 1994, when God began to speak to us regarding foreign missions. In 1996 we moved with our six children to France for language training and then in November 1996, moved to the interior village of Lodja. We later moved to Kinshasa, the capital city, to serve as the administrator of FODESA, our team's Congolese Development Non-Profit Organization.  In 2001, Dean assumed the responsibility as the IOM Field Director in Congo and in 2009, our vision to establish a Biblical Training Center in Congo was realized. In addition to our work in Congo, Dean is also working and teaching in several other African countries.  Five of our six children are married, and we have eighteen grandchildren. 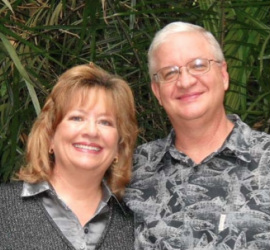 Dean and Autumn Jordon
learn more about our ministry